We can’t go back to who we were before, so light a candle and follow me. Who knows what we’ll find in that darkness?

KENZIE’S PROJECT is a perilous adventure of clever ambition and weird academia, inspired by the work of Leena Krohn and Jeff Vandermeer. Play as science weirdos and literature freaks, academics haunted by our knowledge — racing to complete our projects before the world catches up to us.

[Content warnings for this game: school anxieties; unreality; themes of manipulation, death and dying; mentions of self harm]

KENZIE'S appeared in the Queer Games Bundle 2022, organized by Nilson and Taylor!

KENZIE'S appeared in SprintingOwl's Trick and Treat Bundle in October of 2021!

KENZIE'S also appeared in the Bundle for Ukraine, organized by Necrosoft Games, a charity bundle that raised almost two million dollars in its first day!

In order to download this ttrpg you must purchase it at or above the minimum price of $10 USD. You will get access to the following files:

Support this ttrpg at or above a special price point to receive something exclusive.

please help yourself to a community copy of this game if you can't afford it for any reason!

if you claim a copy, all i ask is that you rate 5 stars before you leave (+ a comment would be appreciated if you have time and energy!)

i'll add one community copy for each sale of the game, plus one additional copy for every $3 added to the sale above the asking price!

I am so excited to play this game! Once I found out, I immediately texted two of my cohort mates to play. What a thrilling -- and slightly horrifying -- concept.

Kenzie's Project is an academic horror game for 3 players. You play as academics haunted by knowledge, racing to complete your project before the subject of study, the management, or a ghost ruin your lives.

and here's a mirror on Spotify:

Kenzie's Project is a podcast-feeling ttrpg. I'm using that term vaguely, but I think it's appropriate. The contents of any game of Kenzie's Project will always feel like a compelling narrative supernatural podcast.

The PDF is 21 pages, and layed out in a sort of informal, poetry-zine kind of way. It's easily readable, but the text feels kind of like it's being spoken softly. This isn't a bad thing, and it matches the atmosphere.

Gameplay-wise, Kenzie's Project is very tightly scoped. There are three named characters you can play as, and this is a three-player game. There are also three antagonists, and the players step in and out of character and antagonist roles fluidly in exactly the same way as a Belonging Outside Belonging game. It's not exactly true that there's no GM, but the GM role is distributed evenly between the players.

Mechanically, Kenzie's Project uses tokens and Moves that manipulate them. If you have tokens, you can spend them for narrative effect. If you want tokens, you can hinder yourself or your allies to get them. There are also Traits, which are primarily descriptive tags added to things, and some Moves can create and interact with Projects---perilous undertakings that propel the story forward.

Someone who is very new to ttrpgs is probably going to get a little turned around here, but if you've played something like The Quiet Year of Dream Apart you'll absolutely be fine. And if you just automatically lean into "what would a supernatural podcast do right now," you'll also be fine.

Overall, if you're used to ttrpgs with clear goals and mechanical objectives, this isn't that. This is about spinning a compelling drama while barely comprehended forces spiral out of control. However, if you like acting, you have two friends, you're willing to play the game slowly, and you want to go for a heck of a ride, Kenzie's Project is definitely worth checking out.

thank you so much for the review!!

This is a really rich, interesting game – there are certain absences and ambiguities in the text that nicely mirror the growing uncertainty and surreality of the characters. "The project chooses, not you." *chef's kiss* 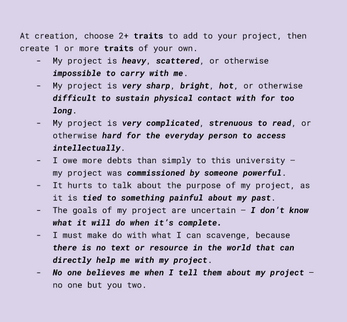 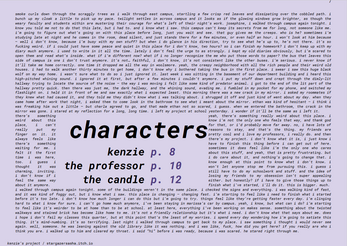 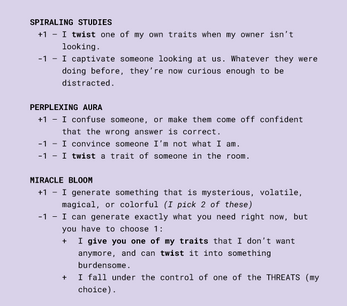